Liturgical Q and A: Gloria at Nuptial Mass 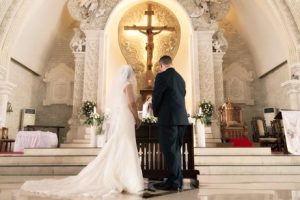 Since the promulgation and subsequent implementation of the revised Order of Celebrating Matrimony, the Liturgy Office has received a number of questions regarding the use of the Gloria in ritual Masses.  As discussed in the September 2014 issue of Liturgy Update, both the Roman Missal and the Order of Celebrating Matrimony indicate that the Gloria is to be sung or said in ritual Masses for the celebration of marriage, including those that occur during Advent and Lent.

The inclusion of this ritual text in the marriage rite can admittedly present pastoral challenges, particularly when either the text of the Gloria or the musical setting that is selected is unknown to some members of the congregation.  In these cases, it may be helpful to include the full text and music of the Gloria in a program or worship aid.  Keeping in mind that other aspects of the marriage rite may also be unfamiliar to those gathered (such as the acclamation following the reception of consent), participation aids can be of great assistance in promoting the active participation of the congregation at multiple points throughout the wedding liturgy.

With regard to the musical setting to be chosen for this text, the various options given by the General Instruction of the Roman Missal [GIRM] for the proclamation of Gloria should be carefully considered in light of the pastoral circumstances of the wedding and the desire to foster the participation of those gathered:

In an effort to encourage congregational singing of the Gloria, some parishes have found it helpful to use either a recto tono setting with a modulating accompaniment or a setting in which a simple musical theme is repeated throughout the singing of the hymn.  A refrain Gloria can also be used to promote participation, although the USCCB has noted that through-composed settings offer a clearer expression of the text as given in the Roman Missal (Sing to the Lord, 149).  Lastly, while the Gloria may be recited, efforts should be made to sing this text, bearing in mind the festive character of the occasion, the presence of musicians to accompany and lead the congregation, and the GIRM’s description of the Gloria as a “a most ancient and venerable hymn by which the Church, gathered in the Holy Spirit, glorifies and entreats God the Father and the Lamb” (53).