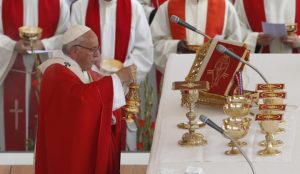 The Holy See recently announced that Pope Francis has signed an Apostolic Letter issued motu proprio (on his own initiative) which amends a portion of the Code of Canon Law (c. 838) having to do with the preparation, review, and approval of liturgical translations.  The letter, entitled Magnum principium, indicates that these changes are intended to clarify the respective roles of the Apostolic See and conferences of bishops in the translation of the Latin liturgical books into vernacular languages.

In a commentary accompanying the motu proprio, Archbishop Arthur Roche, Secretary to the Congregation for Divine Worship and Discipline of the Sacraments, noted that, until recently, the Congregation was asked to give its recognitio to both liturgical translations and “more radical” liturgical adaptations established and approved by bishops’ conferences.  Archbishop Roche described the recognitio as a process of “review and evaluation” undertaken in order to “safeguard the unity of the Roman Rite.”

The confirmatio of the Apostolic See is… not to be considered as an alternative intervention in the process of translation, but rather, an authoritative act by which the competent dicastery ratifies the approval of the bishops.  Obviously, this presupposes a positive evaluation of the fidelity and congruence of the texts produced in respect to the typical editions on which the unity of the Rite is founded, and, above all, taking account of the texts of greatest importance, in particular the sacramental formulae, the Eucharistic Prayers, the prayers of Ordination, the Order of Mass and so on.

It has been speculated that this change to canon law may result in an accelerated approval process for liturgical translations.  Currently, the USCCB has several such translations which are awaiting the Holy See’s approval, including the Order of Baptism of Children and the Order of Blessing the Oils of Catechumens and the Sick and Consecration of Chrism.

With regard to the preparation of future translations, Archbishop Wilton Gregory, chair of the USCCB’s Committee on Divine Worship, indicated to the US bishops in their annual November meeting that Magnum principium gives the Conference “more authority to determine the best way to apply the guidelines of Liturgiam authenticam” to the translation of liturgical texts.  Liturgiam authenticam is the document issued in 2001 by the Congregation for Divine Worship and the Discipline of the Sacraments which outlines principles and processes pertaining to the use of vernacular languages for the celebration of the liturgy.  In his recent motu proprio, Pope Francis offered the following additional guidance concerning future liturgical translations:

The goal of the translation of liturgical texts and of biblical texts for the Liturgy of the Word is to announce the word of salvation to the faithful in obedience to the faith and to express the prayer of the Church to the Lord.  For this purpose it is necessary to communicate to a given people using its own language all that the Church intended to communicate to other people through the Latin language.  While fidelity cannot always be judged by individual words but must be sought in the context of the whole communicative act and according to its literary genre, nevertheless some particular terms must also be considered in the context of the entire Catholic faith because each translation of texts must be congruent with sound doctrine.

The USCCB’s Office of Canonical Affairs and its Secretariat of Divine Worship have been asked to study the motu proprio and its accompanying documents in order to determine which administrative procedures may need to be adjusted in light of the canonical changes called for by Magnum principium.  The Divine Worship Secretariat expects to be able to offer additional commentary on this topic in the forthcoming months.