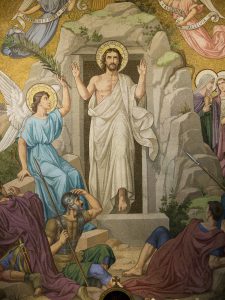 The Order of Christian Funerals [OCF] states that family members of the deceased should take an active part in planning the funeral Mass. In coordination with the parish, they should arrange the place and time for the Mass and participate in the selection of texts and rites provided in the OCF. Yet, many Catholics do not feel up to this task due to the grief experienced during a time of loss. As well, most mourners have never been asked to plan a Catholic liturgy before. In order to assist family members in this task, parishes may wish to offer the following guidance:

Recounting Salvation History – A focused retelling of the story of salvation history and the triumph of Christ’s victory over sin and death can provide a helpful spiritual context for family members as they begin to discuss the liturgical options for the funeral. For many Catholics, it may  have been some time since they have considered fundamental questions concerning the human condition, such as: Why does death exist? Why do we struggle with sin? How can we be rescued from sin and death? How can we find true satisfaction in this life? How has Christ rescued humanity from the power of sin and death? How is this actualized in the sacraments? Why do we pray for the dead? What does it mean to be one with God forever in heaven? While answers to these questions will certainly be developed in the homily at the funeral Mass, family members may find it helpful to be reminded of the Church’s teaching on the meaning and power of Christ’s Paschal Mystery at the outset of the funeral planning process, bearing in mind that the funeral itself is meant to be a celebration of God’s work of salvation.

Purpose of the Funeral Rites – It is common practice in American society to describe funeral services as “a celebration of the life of N.,” but the Catholic funeral liturgy has a broader set of concerns that extends beyond a grateful look back at the life of the deceased. The OCF states that the funeral liturgy is intended to 1. give praise and worship to God in thanksgiving for the gift of life, especially that of the deceased, 2. commend the dead to God’s mercy and plead for the forgiveness of their sins, and 3. provide consolation to the living through the proclamation and celebration of God’s saving works and abiding love. Each of these themes should be expressed at the funeral, and when planning and celebrating the funeral Mass, they should be regularly referenced as a way of ensuring that the various elements of the liturgy work together to speak to these intended emphases.

Selection of Readings – The OCF includes a listing of readings for use at the funeral Mass and other funeral rites. These texts have been selected for these liturgies because they proclaim the Paschal Mystery of Christ, teach remembrance of the dead, convey a sense of hope in being gathered together one day in God’s kingdom, and encourage the witness of Christian life. In so doing, these readings assist in fostering the worship of God, encourage prayer for the deceased, and proclaim hope to the living. While there is an opportunity to select Scriptural readings other than those assigned to the funeral Mass (perhaps because a text was a particular favorite of the deceased), this should not be done too often, as other passages might not speak as directly to  the designated themes of the funeral liturgy as those which are listed in the OCF. Non-Scriptural texts may not be proclaimed in lieu of those taken from the Lectionary, as Christ becomes present to the assembly whenever the Word of God is proclaimed, and this liturgical action is a powerful and privileged opportunity for mourners to experience a sense of union with the Lord, who offers divine comfort and hope during a time of loss.

Proclamation of Readings – Family members and friends of the deceased may be invited to proclaim the readings, but this should only take place if they have previous experience in reading at Sunday Mass and if they feel up to the task, bearing in mind the strong emotions usually experienced during a time of personal loss. Proclaiming the Scriptures at Mass involves prayer, study, and practice, and most lectors receive special training so that they can faithfully convey the sense of the sacred text through the art of public speaking. Reading at Mass is not simply a matter of speaking a text aloud; it is a profoundly spiritual action that builds on natural gifts and other skills which have been developed over time. For this reason, experienced lectors will typically be in a better position to offer a proclamation that will touch the minds and hearts of the gathered community than would someone who is asked to do so for the first time. As well, it is often wise to ask someone who is an experienced lector, but who is also one step removed from the immediate family of the deceased, to perform this action, as a reader who becomes emotional or who breaks down will not be able to proclaim the text effectively or convey an intended sense of Christian hope. Family members and friends who would like to participate in the funeral liturgy in some other special way may be invited to serve as pallbearers or bring up the gifts during the Presentation of the Gifts.

Selection of Music – The OCF states that the purpose of music at the funeral liturgy is to “give praise to the Lord, whose Paschal Sacrifice has freed us from the bonds of death” (248). Music that is sung at the funeral Mass should give obvious praise to the Lord and speak directly to Christ’s triumph over sin and death. However, family members of the deceased sometimes request that secular songs which held special meaning for the deceased also be played at funerals. Inasmuch as the funeral Mass is a time designated for prayer, secular music will typically feel out of place in the context of Christian liturgy, and, for that reason, should be played in other, non-sacred settings, such as a family gathering following the committal service.

In order to assist family members in the selection of music, many parishes have assembled a listing of appropriate songs for the funeral liturgy. (A sample listing may be obtained at the enclosed link.) A parish resource might also include mention of the  fact that sacred music acquires its holy qualities primarily by its connection to a sacred text, such as Scripture or a part of the Mass. Additionally, sacred music should encourage the active participation of the faithful in liturgical prayer, whether through vocal participation or active listening. In short, music sung at a funeral should not have the quality of a performance, but rather, communal prayer. For this reason, the use of pre-recorded music is to be avoided, as live music will be a more authentic expression of the praise and worship offered by a gathered community.

In most parishes, a cantor leads the congregation in singing at funeral Masses. Communal singing can also be encouraged by announcing the number of the hymn that will be sung, through the distribution of worship aids, or by singing a psalm with an easily memorized refrain that is repeated by the congregation. Relatedly, professional musicians should normally be hired to serve as cantors and instrumentalists at the funeral. Unless a mourner has previous experience singing or playing a musical instrument in front of a large crowd, a professional church musician will usually be better able to handle the duties of providing music in this setting. As well, parish organists and cantors typically have years of pastoral experience which prepare them to lead a gathered community in sung prayer with skill and confidence.

Words of Remembrance – Family members and friends frequently wish to offer public comments following the Prayer after Communion. The OCF describes this address not as a “eulogy” (or, literally, “words of praise”), but rather, as “words of remembrance.” The OCF also indicates that these comments are optional. For this reason, it is recommended that parishes do not include a space for this address on their funeral planning sheets, as this might give the mistaken impression to mourners that this is an expected part of the funeral Mass. In the Archdiocese of New York, words of remembrance are permitted at the discretion of the pastor. Parishes that allow words of remembrance are encouraged to develop a written policy which indicates that this address should:

Words of remembrance should, in some way, connect the faith-life of the individual to the joy-filled memories shared by those in attendance. The deceased’s particular virtues, their expressions of Christian love, and the way in which they have inspired the faith of others are all appropriate topics for this address. As with lectors, it is recommended to have someone who is one step removed from the immediate family of the deceased deliver this address, as there is less of a chance in this case that emotion will overtake the speaker. As well, it is best to have an experienced public speaker offer these comments, so that their presentation complements the other carefully planned and well-executed elements of the funeral liturgy.

It should also be noted that the Latin typical edition of the funeral rites (the Ordo exsequiarum) also includes an option for this address, referring to it, not as “words of remembrance,” but rather, as “words of greeting” (verba salutationis). Furthermore, the Latin text describes this action as taking place while the priest and ministers are already standing at the casket immediately prior to the final commendation. Thus, the original vision for this address would seem to be a brief thank you on behalf of the family to those who came to the funeral, and perhaps an invitation to a gathering afterwards. This is something that parishes may also wish to emphasize when offering instructions on this practice, so as to alleviate any concerns that a lengthy public address is expected at the funeral.

This and more information on planning the funeral rites is presented in a new online and on-demand course sponsored by the Liturgy Office. This free course can be accessed at nyliturgy.teachable.com, and parishes may wish to direct pastoral staff, bereavement coordinators, mourners, and funeral directors to this new resource.