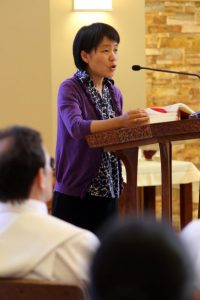 On January 10, Pope Francis signed an apostolic letter (Spiritus Domini) which altered the Code of Canon Law to allow women to be admitted to the instituted ministries of acolyte and lector. For centuries, these offices were considered “minor orders” on the path to the priesthood, but they were abolished by Pope Saint Paul VI in 1972, at which time he established the two instituted ministries of lector and acolyte. These ministries were restricted to men, and, in some dioceses, reserved to those preparing for the priesthood in seminaries. Of course, women and girls have also served in these roles by temporary designation for decades; however, the Holy Father’s recent apostolic letter now makes provision for permanently assigning them, by means of an established liturgical rite, to these ministries.

Spiritus Domini describes instituted lectors and acolytes as men and women who have prayerfully discerned a charism of liturgical ministry within the Church that is a particular  exercise of their baptismal priesthood. Pope Saint Paul VI’s apostolic letter, Ministeria quaedam (1972), had already listed the qualities and functions that would characterize these persons, some of which extend beyond service in the sanctuary:

⦁ Proclaims the readings from sacred Scripture, except for the gospel in the Mass and other sacred celebrations;

⦁ Recites the psalm between the readings when there is no psalmist;

⦁ Presents the intentions for the universal prayer in the absence of a deacon or cantor;

⦁ Takes care of preparing other faithful who are appointed on a temporary basis to read the Scriptures in liturgical celebrations; and,

⦁ Aids the deacon, and ministers to the priest, especially in the celebration of Mass;

⦁ Distributes communion as an extraordinary minister of holy communion;

⦁ May be entrusted with publicly exposing the Blessed Sacrament for adoration by the faithful and afterward replacing it, but not with blessing the people;

⦁ Instructs other faithful who on a temporary basis are appointed to assist the priest or deacon in liturgical celebrations by carrying the Missal, cross, candles, etc., or by performing other such duties; and,

In view of these descriptions, it would seem to be the Church’s intention that instituted lectors and acolytes would take on a leadership role among the other lay readers and servers in the parish, instructing and serving as a model of ministry for them. What is probably not envisioned is that every reader or server in the parish would be an instituted minister.

At this time, the Archdiocese awaits further instructions from the USCCB, which is entrusted with publishing guidelines and establishing criteria for the selection of instituted lectors and acolytes for the United States. Notwithstanding, it is anticipated that these will include a minimum age requirement, a prayerful discernment of one’s charism in collaboration with one’s pastor, suitable instruction, and the celebration of a formal rite of institution and blessing. It should be noted that the current rite of installation will also have to be updated, as it now refers only to men.