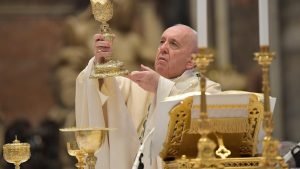 On June 29, the Solemnity of Saints Peter and Paul, Pope Francis issued an apostolic letter entitled Desiderio desideravi on the liturgical formation of the People of God. The document takes its title from the words of Jesus to the apostles at the Last Supper – “I have earnestly desired (desiderio desideravi) to eat this Passover meal with you.”

In his letter, Pope Francis offers a meditation meant to assist the Church in understanding the beauty and dynamism of the liturgy. He explains that this brief document is not intended to be a comprehensive treatment of all the historical and pastoral aspects of the Church’s liturgical life; rather, it focuses on certain issues which the Holy Father believes deserve greater attention in our time. These include a recovery of a symbolic world view in light of a post-modern emphasis on individualism and subjectivism and the rekindling of a sense of the liturgy as a place of encounter with Christ.

Quoting the early 20th century liturgist, Romano Guardini, Pope Francis maintains that the first task in liturgical formation is for humanity to “become once again capable of symbols.” He admits, however, that this is not easy to achieve, “because modern man has become illiterate, no longer able to read symbols” (44). In response, Pope Francis draws attention to the manner in which the sacraments of the Church use created matter to communicate the life and love of God as “instruments of salvation, vehicles of the Spirit, [and] channels of grace” (46). This, he says, is similarly true of the human body, inasmuch as it can express an openness to the transcendence of God that characterizes the soul. Indeed, bodily actions performed by the celebrant and the gathered faithful are striking symbols of an interior posture of worship.

It is with reference to liturgical gestures and postures that Pope Francis offers an extended reflection on the ars celebrandi, or the “art of celebrating” the liturgy. Pope Benedict XVI had  already drawn attention to the importance of the ars celebrandi in his 2007 post synodal exhortation Sacramentum caritatis. At that time, Pope Benedict noted that the liturgy is firstly the work of Christ, in which the People of God participate by virtue of their baptism. For this reason, the “art of celebrating” the liturgy is not a call to personal creativity, but rather, a faithful observance of liturgical norms which are expressive of the worship of the entire Church, head and members. Amongst the various elements which make up the liturgy, Pope Benedict especially emphasized the proper use of liturgical symbols, including the “simplicity of gestures and sobriety of [the] orderly sequence of signs [which] communicate and inspire more than contrived  and inappropriate additions” (40).

In Desiderio desideravi, Pope Francis similarly draws attention to the connection between the ars celebrandi and the proper use of symbols. He notes that even simple actions such as “gathering, careful walking in procession, being seated, standing, kneeling, singing, being in silence, acclamations, looking and listening” are ways in which the worship of the Church is manifested (51). And, whereas discussions of the ars celebrandi often focus only on the actions of the presiding celebrant, Pope Francis indicates that the entire Body of Christ should be concerned with this aspect of right worship; in fact, he writes, “the ars celebrandi is required [emphasis added] of the entire assembly that celebrates” (54). For this reason, Pope Francis underscores the need to develop within the Church’s members a sense of “liturgical etiquette,” or a “discipline” involving liturgical actions that is formative. He explains, “these are gestures that place order within our interior world making us live certain feelings, attitudes, behaviors. They are an action that engages the body in its entirety, that is to say, in its being a unity of body and soul” (51).

Although all the baptized should be taught to celebrate the liturgy well, Pope Francis highlights the pivotal role that the celebrant plays in fostering a proper ars celebrandi in a community. He notes that the gestures and words of presiders have a special “sacramental weight,” such that the assembly should be able to perceive in these the presence of the risen Lord Himself (51). A desire to share Christ with those gathered should lead celebrants to a careful examination of their own presiding style, to distinguish those aspects of their gestures and vocalizations that are conduits of the divine from those which distract or draw attention only to oneself. To this end, Pope Francis offers a liturgical examination of conscience for celebrants in Desiderio desideravi, noting the inadequacies of styles characterized by a “rigid austerity or an exasperating creativity, a spiritualizing mysticism or a practical functionalism, a rushed briskness or an overemphasized slowness, a sloppy carelessness or an excessive finickiness, a superabundant friendliness or priestly impassibility” (54). All of these mistaken approaches to celebrating the liturgy are the result, he writes, of a “heightened personalism” wherein the celebrant becomes the center of attention, in lieu of Christ.

The antidote to such an approach, Pope Francis maintains, is for the celebrant to enter into an ever deepening communion with the Lord. It is in prayer that the celebrant develops a greater appreciation for the love of God for himself and for each person and becomes, as it were, “overpowered by this desire of communion that the Lord has toward each person. It is as if he were placed in the middle between Jesus’ burning heart of love and the heart of each of the faithful, which is the object of the Lord’s love” (57). It is thus through the celebrant’s prayerful humility before Christ and in recognizing the dignity of his priestly office that the celebrant is able to foster a true encounter with Christ and all those gathered through the art of celebrating the liturgy.