Solemnity of Mary, Mother of God 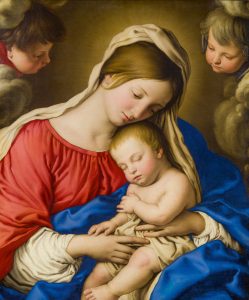 Amongst the many feasts of the liturgical year which honor Our Lady, the Solemnity of Mary, the Holy Mother of God, holds a special place. On this day, the Church commemorates the unique role played by Mary in the mystery of salvation and celebrates her divine maternity, by which the human race received Jesus, the Son of God and Author of Life.

This beloved celebration finds its origins in the early Christian community’s response to the Roman feasting of Janus, the pagan god of beginnings and transitions. At the start of the new year, Romans would give honor to this god who had two faces and who looked in two directions: to the old year which was ending and to the new year to come. As was the custom on most pagan feast days, January 1 was marked by revelry and overindulgence . The chaos that preoccupied society on this day was meant to mimic the origins of the universe, when the gods were thought to have created the ordered world out of the primordial confusion of stars and planets.

In the early days of Christianity, followers of Jesus wanted nothing to do with these pagan displays of excess; in response, they counseled a different approach, recommending that Christians mark the beginning of the year with fasting and other penitential practices. Saint Augustine, for example, enjoined his flock to repudiate the prevailing culture, writing: “Let the pagans give new year’s gifts; you should give alms. Let them sing boisterous songs: you should open your hearts to the word of God. Let them rush to the theater: you should rush to the church. Let them get drunk: you should fast.” This anti-pagan emphasis continued to characterize Christian New Year observances for many centuries, with liturgical books often ascribing the title “Ad prohibendum ab idolis [For protection against idolatry]” to prayers for January 1.

As one might expect, when faced with the decision of whether to feast or fast, many Christians were inclined to choose the former. And so, by the fifth century, the Church decided to try a new approach to  its observance of January 1, redirecting the celebratory character of this day to a more noble end. Now, the first day of the year would be used to honor Mary under the title theotokos, or “God-bearer.” This change was generally accepted by the Christian community. However, by the eighth century, many new feasts dedicated to Mary, such as the Annunciation and Assumption, had also been added to the liturgical calendar, and the celebration of January 1 began to decline in importance.

In the thirteenth century, January 1 took on a new title: “The Circumcision of the Lord and the Octave of Christmas.” This day now marked the events immediately following the Lord’s birth, including his naming and circumcision. Later, in an effort to connect January 1 more closely to the Church’s celebration of the Lord’s Nativity, Pope Saint John XXIII renamed this day once again in 1960, entitling it simply, “The Octave of Christmas.”

During the reform of the liturgical calendar following the Second Vatican Council, the original focus of many Church feasts was restored. To that end, the liturgical texts assigned to January 1 returned to emphasizing the Motherhood of Mary. The prayers and readings for this day now present the events marked during the Christmas season through the eyes of Mary and invoke her intercession at the start of the new year.

In another recent development, Pope Saint Paul VI established January 1 as a World Day of Peace in 1967, stating at the time that the desire for peace is at the heart of the Church’s devotion to Mary. Earlier this year, Pope Francis explained the connection between these two themes in this way:

The reassuring and comforting gaze of the Holy Virgin is an encouragement to ensure that this time, granted to us by the Lord, be spent on our human and spiritual growth, that it be a time in which hatred and division — and there are many of them — be resolved, that it be a time to feel more like brothers and sisters, a time to build and not to destroy, to take care of one another and of creation. A time to make things grow, a time of peace (Angelus Address for the Solemnity of Mary, Mother of God, January 1, 2021).

In recognition of the importance of Our Lady’s Motherhood in the life of the Church, January 1 is a Holy Day of Obligation in the United States, except when it falls on a Saturday or Monday. In 2022, January 1 is a Saturday, and Catholics are not obligated to attend Mass on this day. Even so, the celebration retains its status as a solemnity, and Masses on Friday evening should be celebrated using the vigil texts for the feast. Saturday evening, however, marks the beginning of the celebration of Epiphany, and evening Masses on January 1 should use the liturgical texts for the Epiphany of the Lord in 2022.

One last note concerning the liturgical commemoration of January 1: amongst its Masses for Various Needs and Occasions, the Roman Missal includes a Mass “For the Beginning of the Civil Year.” Following the liturgical rule that Masses for various needs may not be celebrated on solemnities, the rubric which precedes the Mass for the Beginning of the Civil Year indicates that these prayers may not be used on January 1. They could, however, be used on other days close to the beginning of the civil year, or even in those countries and communities which mark the start of their calendars during other months of the year.