The Year of Mercy and the Holy Doors 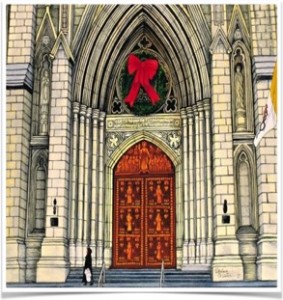 In his papal bull announcing the forthcoming Year of Mercy (Misericordiae Vultus [MV]), Pope Francis made special mention of the opening of the Holy Door at Saint Peter’s Basilica.  This Door will be opened on December 8, 2015, the Solemnity of the Immaculate Conception, and will remain open throughout the Year of Mercy.  In the same announcement, Pope Francis indicated that other holy doors would be opened throughout Rome at the other papal basilicas, as well as in cathedral churches  and other designated shrines throughout the world.

The concept of the Holy Door is rich in its theological meaning and historical significance.  The first Holy Door was designated by Pope Martin V, in 1423, at the Basilica of Saint John Lateran.  A second Holy Door was opened at Saint Peter’s Basilica on Christmas in the jubilee year of 1499.  Since this time, Holy Doors  have become a staple feature of jubilee year celebrations. The original liturgy for the opening of the Holy Door at Saint Peter’s included several unique ritual elements.  The rite began with the creation of an opening in one of the walls of Saint Peter’s Basilica.  The Holy Father himself initiated this action by striking the stones of the wall with a ceremonial hammer.  As masons continued the work of deconstructing the wall in preparation for the mounting of the Holy Door, the faithful would rush to gather the fragments of the bricks and cement, treating them as relics.  At the conclusion of a jubilee year, the Pope would begin the process of resealing the wall by laying down several bricks and placing coins that commemorated the year into the cement. In recent years, several changes have been made to these rites.

The Holy Father no longer participates in the opening and closing of the wall, but rather, the Holy Door itself.  The liturgical texts present the Door as a symbol of Christ, who described Himself as the “door for the sheep” (Jn 10:7).  In his announcement of the Year of Mercy, Pope Francis added another dimension to this theology, referring to the Holy Door as a “Door of Mercy, through which anyone who enters will experience the love of God who consoles, pardons, and instills hope” (MV, 3).  The Holy Father explained that, “by crossing the threshold…, we will find the strength to embrace God’s mercy and dedicate ourselves to being merciful with others as the Father has been with us” (MV, 14).  In this way, the Holy Father intends the Holy Door to be a symbol of encounter with Christ, who is “the face of the Father’s mercy” (MV, 1).

In the Archdiocese of New York, Cardinal Dolan has designated five Doors of Mercy where pilgrims will have the opportunity to encounter this profound symbol of Christ’s desire to welcome all into the Kingdom of God.  These Doors may be visited at:

– the Basilica of Saint Patrick’s Old Cathedral in Manhattan;

– the Shrine Church of Saint Frances Cabrini in Manhattan;

– the National Shine of Our Lady of Mount Carmel in Middletown; and

– the Salesian National Shrine of Our Lady Help of Christians in Stony Point.